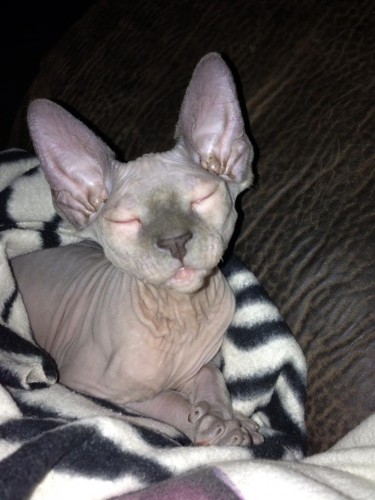 WE RECOMMEND YOU RESEARCH THEM BEFORE ADOPTING!

Special Characteristics: The Sphynx is often referred to as a feline alien due to its pixie face, giant batty ears, and wrinkled skin nearly void of any hair. Some do not have whiskers or eyebrows. Its skin brings out the curious must-touch in those who come into contact with them.  No need for a comb or brush for this breed, however like a baby they must be bathed often and have a few special care requirements. Visit our Care Tips page for help.  Their average weight is 7 to 10 pounds.  Be aware that its body is highly susceptible to sunburn. Apply cat-safe sun block and limit your Sphynx’s exposure outside during sunny days.

Sphynx Trademark Traits they are Extremely Affectionate and Needy like a Baby, Very curious, playful and mischievous. They are highly intelligent and often described as having a personality more like a Dog or Monkey than cat. I have never found a more lovable companion in my life.  They love to be kissed and make an ideal Human Companion for anyone willing to care for them properly.  They are Excellent for Families with children, for Singles with other pets (animals of all types will bond with our Sphynx babies because they are raised with NO FEAR), or for Experienced cat owners who will find them to be the most amazing and unique creature they have ever experienced.

This smart, high-energy breed loves to show off for his favorite people and is normally very social to house guests, usually demanding their attention. The Sphynx seems to operate on two speeds: fast and stop. When it is time to nap, a Sphynx turns into a self powered heater. We jokingly say ours range from 10,000 to 20,000 degrees. They will search to find a toasty place, usually under the covers but their loving nature can force them to even sacrifice that to be in your lap or with you. Don’t be surprised by their appetites because this breed is noted for its high metabolism and need to eat a hardy portion of food daily, but is at low risk for becoming overweight or obese due to their active natures. 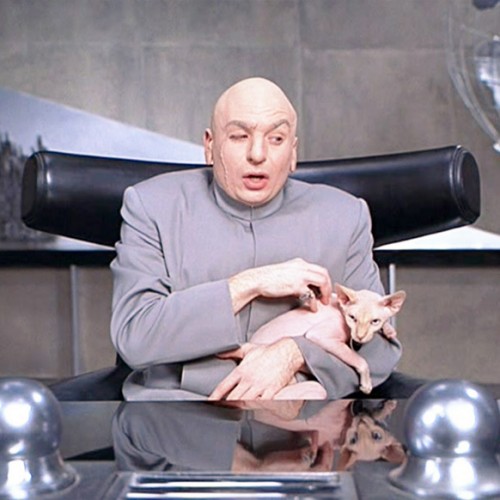 While the Sphynx is called “hairless” look close and you will notice a light layer of soft, fine down on its coat and are not hypoallergenic. Its body feels like warm Chamois leather and their dander is capable of evoking allergic reactions in people who have cat allergies but we have seen HIGHLY ALERGIC people have no reaction to them at all. If you are alergic but always loved cats you should visit a “HAIR FREE” home and experiment with exposure before adopting.

Mr. Bigglesworth has become the poster cat for this breed. This cat character from the popular Austin Powers movies was portrayed by two Sphynx named Ted Nude-gent and Mel Gibskin.  You should notice some similarities in him and our stud Loki.

The Don Sphynx (Donskoy) originated in 1987 from a cat in the city of Rostov-on-Don. Helena Kovalyova ran off some boys kicking a cat in a pillow case. She took the cat home and noticed that its coat was lacking fur. She tried medical treatments with noticeable change. She then decided to breed the cat with a European Shorthair male. Four healthy kittens were born, two which carried this sparse phenotype. Irina Nemykina acquired a kitten from this first litter and started a breeding program. That is when the Don SPHYNX became an entity. It’s main characteristic is its lack of hair. It was registered in the World Cat Federation as a breed in 1996.

Unlike the Canadian Sphynx, the gene occurring from this spontaneous mutation is the dominant gene and is the first truly hairless cat. The Don Sphynx (Donskoy) are elegant, sturdy with strong boning. They are a soft hearted good natured social cat that is active, friendly and highly intelligent. They are a very affectionate and loving animal.

Originally the name “Sphynx” was attributed to hairless cats, bred on the basis of the mutation revealed in Canada. Canadian mutation is appointed to a recessive allele – hr. Specimens that are homozygous for this allele (hrhr) do not always display hairlessness in it’s full expression. Sometimes they have a thin residual coat with a corrupted texture that is more prominent on the legs, muzzle and tail (these are so-called Points). The Russian mutation the Don Sphynx & the Peterbald behaved in some other way. It revealed itself as early as the first generation from two cats – normal and hairless. The results of such mating re quite mixed. Some heterozygous offspring had a residual curly coat, which could be extremely short (“velour”) or of normal length but rare, and shafts of hair were thin. These coat texture abnormalities often came together with a bald spot on the crown. These kittens lost their coat as they grew older – hair bulbs died on some regions or on all surface of skin (except for points). The “shedding” happened in the period from two months to three years of age.Other heterozygous kittens were born with thick curly hair of normal length staying coated for life. These animals are called “brush”.Among the second generation, animals from both “shed’ parents or one “brush” and one “shed”, were born completely “Hairless at Birth”. Their elastic large skin was wrinkled and some had no whiskers.The most evident Don Sphynx feature is reduced growth (which also correlates with the coat development) “hairless” and sometimes “velour” animals grow noticeably slower than their “coated” siblings. In the adult age they are virtually the same size. This kind of “hairlessness” also influences the cat’s behavior.